This chapter introduces techniques from Functional Programming, which is a programming paradigm centered on functions rather than on variables and statements as you’ve been doing so far (known as imperative programming). Functional programming offers another way to think about giving “instructions” to a computer, which can make it easier to think about and implement some algorithms. While not a completely functional language, Python does contain a number of “functional-programming-like” features that can be mixed with the imperative strategies we’re used to, allowing for more compact, readable, and “Pythonic” code in some cases.

Previously we’ve described functions as “named sequences of instructions”, or groupings of lines of code that are given a name. But in a functional programming paradigm, functions are first-class objects—that is, they are “things” (values) that can be organized and manipulated just like variables.

In Python, functions ARE variables:

Note that we refer to the function by its name without the parentheses!

This is why it is possible to accidentally “overwrite” built-in functions by assigning values to variables like sum, max, or dict.

The fact that functions are variables is the core realization to make when programming in a functional style. You need to be able to think about functions as things (nouns), rather than as behaviors (verbs). If you imagine that functions are “recipes”, then you need to think about them as pages from the cookbook (that can be bound together or handed to a friend), rather than just the sequence of actions that they tell you to perform.

Moreover, functions are values, so they can be passed as parameters to other functions!

In this case, the do_with_world function will call whatever function it is given, passing in a value of "world". (You can think of this as similar to having a function that accesses the 'world' key of a given dictionary).

A function that is passed into another is commonly referred to as a callback function: it is an argument that the other function will “call back to” and execute when needed.

Functions can take more than one callback function as arguments, which can be a useful way of composing behaviors.

This idea of passing functions are arguments to other functions is at the heart of functional programming, and is what gives it expressive power: you can define program behavior primarily in terms of the behaviors that are run, and less in terms of the data variables used.

You have previously used anonymous variables in your programs, or values which are not assigned a variable name (so remain anonymous). These values were defined as literals or expressions and passed directly into functions, rather than assigning them to variables:

You indicate that you are defining a lambda function with the keyword lambda (rather than the keyword def used for named functions). This is followed by a list of arguments separated by commas (what normally goes inside the () parentheses in a named function definition), then a colon :, then the expression that will be returned by the anonymous function.

For example, compare the following named and anonymous function definitions:

You’re basically replacing def and the function name with the word lambda, removing the parentheses around the arguments, and removing the return keyword!

There is one major restriction on what kind of functions can be defined as anonymous lambdas: they must be functions that consist of only a single returned expression. That is, they need to be a function that contains exactly one line of code, which is a return statement (as in the above examples). This means that lambdas are short functions that usually perform very simple transformations to the arguments… exactly what you want to do with functional programming!

Why should you care about treating functions as variables, or defining anonymous lambda functions? Because doing so allows you to replace loops with function calls in some situations. For particular kinds of loops, this can make the code more expressive (more clearly indicative of what it is doing).

For example, consider the following loop:

This loop represents a mapping operation: it takes an original list (e.g., of numbers 1 to 5) and produces a new list with each of the original elements transformed in a certain way (e.g., squared). This is a common operation to apply: maybe you want to “transform” a list so that all the values are rounded or lowercase, or you want to map a list of words to a list of their lengths. It is possible to make these changes uses the same pattern as above: create an empty list, then loop through the original list and append the transformed values to the new list.

However, Python also provides a built-in function called map() that directly performs this kind of mapping operation on a list without needing to use a loop:

Note that in Python 3, the map() function returns an iterator, which is a list-like sequence similar to that returned by a dictionary’s keys() or items() methods. Thus in order to interact with it as a list, it needs to be converted using the list() function.

The map() callback function (e.g., square() in the above example) can also be specified using an anonymous lambda, which allows for concisely written code (but often at the expense of readability—see List Comprehensions below for a more elegant, Pythonic solution).

With this filtering loop, we are keeping the values for which the is_even() function returns true (the function determines “what to let in” not “what to keep out”), which we do by appending the “good” values to a new list.

Similar to map(), Python provides a built-in function called filter() that will directly perform this filtering:

The filter() function takes a list and produces a new list that contains only the elements that do match a specific criteria. The filter() function takes in two arguments: the second is the list to filter, and the first is the name of a callback function that will do the filtering. This callback function must take in a single argument (an element to consider) and return True if the element should be included in the filtered list (or False if it should not be included).

Because map() and filter() both produce list-like sequences, it is possible to take the returned value from one function and pass it in as the argument to the next. For example:

This structure can potentially make it easier to understand the code’s intent: it is “squareing the is_even numbers”!

The third important operation in functional programming (besides mapping and filtering) is reducing a list. Reducing a list means to aggregate that lists values together, transforming the list into a single value. For example, the built-in sum() function is a reducing operation (and in fact, the most common one!): it reduces a list of numbers to a single summed value. Thus you can think of reduce() as a generalization of the sum() function—but rather than just adding (+) the values together, reduce() allows you to specify what operation to perform when aggregating (e.g., multiplication).

Because the reduce() function can be complex to interpret, it was actually removed from the set of “core” built-in functions in Python 3 and relegated to the functools module. Thus you need to import the function in order to use it:

To understand how a reduce operation works, consider the following basic loop:

This loop reduces the list into an “accumulated” product (factorial) of all the numbers in the list. Inside the loop, the multiply() function is called and passed the “current total” and the “new value” to be combined into the aggregate (in that order). The resulting total is then reassigned as the “current total” for the next iteration.

Note that the reduce() function aggregates into a single value, so the result doesn’t need to be converted from an iterator to a list!

To summarize, the map(), filter(), and reduce() operations work as follows: 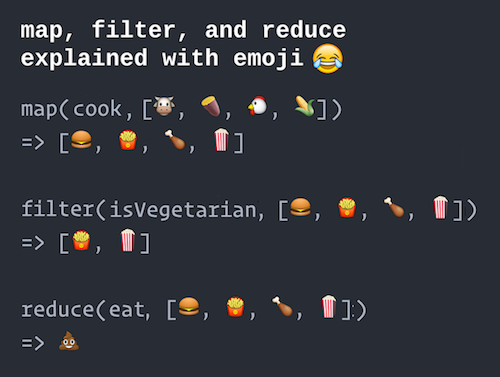 All together, the map, filter, and reduce operations form the basis for a functional consideration of a program. Indeed, these kinds of operations are very common when discussing data manipulations: for example, the famous MapReduce model involves “mapping” each element through a complex function (on a different computer no less!), and then “reducing” the results into a single answer.

While map() and filter() are effective ways of producing new lists from old, they can be somewhat hard to read (particularly when using anonymous lambda functions, which you often would want to do for simple transformations). Instead, a more idiomatic and “Pythonic” approach (preferred by language developer Guido van Rossum) is to use List Comprehensions. A list comprehension is a special syntax for doing mapping and/or filtering operations on list using the for and if keywords you are familiar with.

For example, a list comprehension to map from a list of numbers to their squares would be:

List comprehensions are written inside square brackets [] and use the same for ... in ... syntax used in for loops. However, the expression that you would normally append() to the output list when mapping (or that is returned from an anonymous lambda function) is written before the for. This causes the above comprehension to be read as “a list consisting of n**2 (n squared) for each n in numbers”—it’s almost English!

You can contrast a list comprehension with the same mapping operation done via a loop or via a map() and a lambda:

Notice that all 3 versions specify a transformation expression (n**2) on a input variable (n). They just use different syntax (punctuation and ordering) to specify the transformation that should occur.

List comprehensions can also be used to filter values (even as they are being mapped). This is done by specifying an if filtering condition after the sequence:

Or as a specific example (remember: we filter for elements to keep!):

This can be read as “a list consisting of n for each n in numbers, but only if n%2 == 0”. It is equivalent to using the for loop:

Finally, it is possible to include multiple, nested for and if statements in a list comprehension. Each successive for ... in ... or if expression is included inside the square brackets after the output expression. This allows you to effectively convert nested control structures into a comprehension:

This is equivalent to the nested loops.

(This almost acts like a reduce operation, reducing two lists into a single one… but it doesn’t exactly convert).

Overall, list comprehensions are considered a better, more Pythonic approach to functional programming. However, map() filter() and reduce() functions are a more generalized approach that can be found in multiple different languages and contexts, including other data-processing languages such as R, Julia, and JavaScript. Thus it is good to be at least familiar with both approaches!