One of the most common and important uses of computer programs is to search a large set of data for a specific record or observation—indeed, a significant portion of what computers do is search through data. This chapter covers a number of common patterns and algorithms used when searching through lists of data in order to answer questions about that data. Note that this chapter introduces no new syntax, but instead provides a deeper look at using loops and lists. The first section illustrates common interactions with lists, while the remaining consider at a high level the efficiency of algorithms.

Python does contain built-in operators and list methods (e.g., in, index(), max() etc.) that can answer simple versions of these questions. However, more complex programs may require you to create your own “custom” searches following the patterns described here.

This kind of search involves just a simple for loop (to consider every element) and if statement (to check if the item is the target):

Pay careful attention to the position of the return statements! First, you return True if (when) the target is found—this “exits” the function so you do not keep searching once you’ve found your target. The second return statement occurs after the loop has entirely finished. You need to check every item in the list before you can conclusively say that the item isn’t there (otherwise you may have just missed it).

While a useful organizing tool, a linear search does not need to be implemented as its own function if you instead use a variable to track whether the item is found or not:

To determine which element in the list is the target, you use the same structure but consider the index of each element, returning that index when the item is found. By convention, if the target is not in the list, you return -1 (which will be an out-of-bounds index for any list):

Another common item to search for is the “biggest” (or “smallest”) element in the list. This may be the biggest number, the longest word, the slowest turtle, the highest-scoring sports game… any element that has a “greater” ordinal value (e.g., it comes “first” in some ordered listing, whether that ordering is ascending or descending). Whenever you are searching for the “-est” item in a list, you can use the same variant on a linear search.

I refer to this variant as a “king-of-the-hill” search, named after the children’s game. In this algorithm, start be declaring an initial element (often the first in the list) as the “king”—the “greatest” value in the list. The algorithm then goes down the “line” of elements, having each one in turn “challenge” the king. If the challenging value is greater, then that value becomes the new king, and the process continues. Whichever item is the king in the end must be the “greatest” item that was being searched for.

This algorithm is implemented with a similar structure to the basic linear search, except instead of comparing to the target, you compare to the current “king”:

The most common error with this algorithm is not comparing to the previous maximum, instead trying to compare to e.g, the previous element in the list.

Note that it is also possible to do this same search by using the built-in max() function and specifying an ordering function as an argument, which converts any element into a value with the proper ordering. Using functions as arguments is discussed in the next chapter.

To reiterate, this function can be used to find any extreme value simply by changing the “challenge” comparison. For example use < instead of > to find the “minimum” item, or use a more complex boolean expression to compare dictionary “rows” in a data table.

But loops are only able to consider one element at a time, not “all” the elements at once. So in order to answer these questions, you need to invert the question: saying “all numbers are greater than 10” is logically equivalent to saying “no number is less than (or equal to) 10”.

(Somewhat counter-intuitively, the logical negation of an “all are” predicate is not “none are” but “one is not”). That is, the opposite of “all days are sunny” is not “no days are sunny” but “(at least) one day was not sunny”.

By inverting the question into a search for a counter-example, you can utilize the previous linear search pattern:

Careful variable naming (e.g., all_large) for keeping track of boolean claims is vital to being able to read and write these algorithms!

Overall, a linear search is a simple and versatile algorithm, but can be tricky to apply depending on the question being asked.

Searching is something that you do a lot (and on bigger and bigger data sets!), so it’s worth considering: how fast is this process? How efficient is the algorithm? Is there possibly a more efficient way of searching?

Warning: AVOID PRE-MATURE OPTIMIZATION!! While this section and chapter discuss the “speed” of computer programs, you should avoid spending too much (or any!) time trying to make your program “as fast as possible”. The first step in any computer program is to make it function at all. Once you have it working, then you can worry about increasing the efficiency—and only if it is currently too slow for your purposes. Pre-mature optimization (trying to make it work fast before you make it work at all) is a major source of bugs and other problems.

One way of measuring the speed of an algorithm would be to time it, such as by using a stopwatch. Python includes modules that can be used to record the time, allowing you to get the “start” and “stop” time of the algorithm, and then calculate the elapsed duration. However, this wall-clock efficiency is highly dependent on the exact list being searched and on the computer that is executing the algorithm—if you’re also streaming videos while searching, the algorithm may run slower!

Instead, computer scientists measure the efficiency of a program by counting the number of operations that the algorithm does. This number will be independent of the data and machine, and so makes it easier to compare approaches. Specifically, to measure the efficiency of a search, you would consider the number of comparisons that need to be made between elements (e.g., how many elements you check before you find what you’re looking for), under the assumption that this is the most time-consuming part of the computer’s search algorithm.

Linear search involves looking at each item in the list one at a time, so the number of “checks” that need to be made is dependent on the size of the list. And because the item you’re looking for may be either be at the beginning of the list (meaning you don’t search for very long) or at the end, you can consider both the “average” case (when it’s in the middle), as well as the “worst” case (when it’s at the end or not in the list at all!): 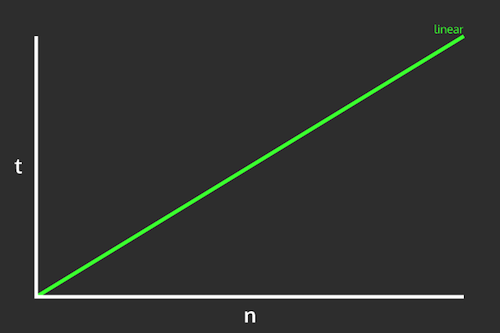 This is in fact why it is called a linear search!

In general, we measure algorithm efficiency (or more properly, algorithmic complexity) in terms of the rate of change in the speed: that is, if you double the size of the input list, by what ratio does the work you need to do increase? With a linear search, doubling the size of the list will double the amount of work to do.

Note that looking up an element by its index or key is a constant function—it takes the same amount of time no matter how big the list or dictionary is. This is part of why dictionaries are so useful as look-up tables: you don’t need to spend time searching for the value if it you have its key!

There are alternate, faster algorithms for searching through lists that can be useful as the data set gets large.

As an example, consider how you might search for a name in a phone book (or a word in an encyclopedia): rather than starting from “A” and going one by one though the book, you flip it open to the middle. If the name you’re after comes later in the alphabet than the page you opened to, then you take the “back half” of the book and flip to the middle of that (otherwise, you flip to the middle of the “front half”). You repeat this process, narrowing the number of pages you need to consider more and more until you’ve found the name you are looking for!

What makes this work is the fact that names in the phone book are ordered: after doing a comparison (checking the name against the page), you know whether to go forward or backwards to find the target.

This algorithm is known as a binary search, and it lets you search an ordered list by comparing to the middle, and reducing the list to only the top or bottom half, and repeating:

This algorithm starts by considering the entire list (with the “goalposts” at either end. It then looks at the middle element. If that isn’t the target, then it moves the appropriate goalpost to that middle spot, thereby throwing away the half of the list and narrowing the search field. This continues until the target is found or the goalposts have moved “past” one another, at which point the search ends. See this animation for an example of how it works.

(Note that this is an example of indefinite iteration: you don’t know how many times you’ll need to cut the list in half before searching, so you use a while loop!)

Using a timer will demonstrate that binary search is much faster than linear search (as the list gets large), but how much faster?

We can solve this equation for the number of loops: 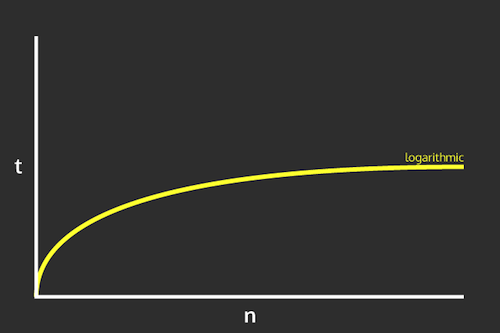 This is drastically faster than a linear search…. however, it requires a list be sorted for it to work!

There are many, many different algorithms for sorting numbers, many of which have amusing names given to them by computer scientists (Python’s built-in sorted() method uses one called Timsort, named after the man who invented it). This chapter will discuss just one straightforward example for illustration purposes.

Faster sorting algorithms (like Python’s Timsort) get this speed down to “fast” N*log2(N) (“loglinear”), which is much better than quadratic algorithms but still notably slower than linear algorithms.

For large lists, sorting a list is slower than just using a linear search on it… but once that list is sorted, you can use the ultra-fast binary search! This is a tradeoff that needs to be considered when trying to improve the efficiency of programs that work on large data sets: sometimes you need to spend some extra time up front to prepare (sort) the data, in order to be able to utilize (search) it more effectively.